Samsung Galaxy S4 Vs Blackberry Z10 : Which is the best, the Samsung or the Blackberry?

Here we have compared two best smartphones of Samsung and Blackberry, Galaxy S4 and Blackberry Z10. Let’s check out the Comparison review. 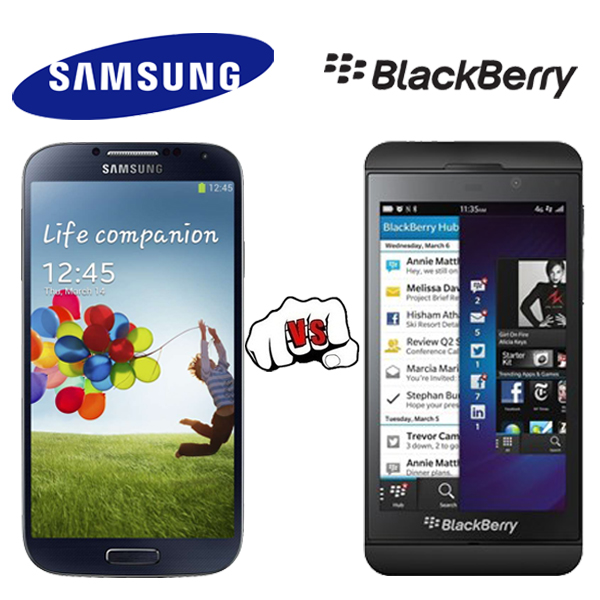 Samsung Galaxy S4 is the  faster, slimmer and lighter version of successful smartphone Samsung Galaxy S3 – the Android Phone that went before. In terms of Design, The Galaxy S4 looks almost similar one to the Galaxy S3. It’s very different to the Blackberry Z10, which looks like a squarer iPhone 5  from front side.The Samsung Galaxy S4 is somewhat like a pebble – like and rounded shape plus having a removable cover which is mostly plastic, while Blackberry Z10 is a thin and stylish rectangular slab of black plus having a thin plastic removable cover.

The Galaxy S4 has a 5in display that has Full HD resolution of 1080×1920, with a pixel density of 441ppi , When you compared Blackberry Z10 to Galaxy S4, It is the quite small  at 4.2in the screen. Still Size is not a problem here, as It’s big enough to browse the web , Use Applications and watch Videos. BlackBerry Z10 has the resolution of 768×1280, that is the highest pixel density of any phone we reviewed.

Comparing the Storage Capacity, The Samsung Galaxy S4 comes with three  different models :16GB, 32GB and 64GB. It has a microSD card slot that takes 64GB cards as standard, while The Blackberry Z10 has a limited storage with only 16GB models .

Therefore, based on your choice & requirements about features, you can decide which one is the best for you among the two!